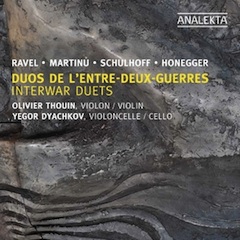 Interwar Duets (Analekta AN 2 9971) features familiar and unfamiliar works for violin and cello performed with aplomb and vigour by Olivier Thouin andYegor Dyachkov. Most familiar is the Sonata for Violin and Cello completed in 1922 by Maurice Ravel. I remember once, after not hearing this extremely virtuosic work in a decade or so, tuning in to a radio broadcast during the Vif, avec entrain final movement and wondering “Oh that’s so familiar, which quartet is that?” – such is the dexterity required of the two musicians. Thouin, currently associate concertmaster of the Orchestre symphonique de Montréal, and well known soloist Dyachkov take it all in stride. They make it sound easy, even effortless, while capturing all the excitement and nuance of the moment. This consummate musicianship is on show throughout the disc, which includes lesser known but delightful duets by Martinu and Honegger. But the real gem for me is the offering by Erwin Schulhoff, composed in 1925. More and more music of this Nazi-designated “Degenerate” composer is gaining attention in recent years and with each new discovery our awareness of the tragedy of the composer’s death in a concentration camp becomes more acute. Schulhoff’sDuet is in the classical four movement form of the sonata. Framed by dramatic rondos utilizing “modal language pushed to the edge of atonality,” the central movements include Zingaresca - a rollicking Gypsy dance - and a sombre Andantino. Although one might wonder whether the stark combination of violin and cello could sustain the listener’s interest for the duration of the disc, I had no problem with attention deficit during these marvellous performances.